The series centered on Ernest Frye, a man who works as a church deacon & a lawyer that usually gets himself into harebrained schemes and clashes with the church's new reverend, Reuben Gregory, who is attracted to Frye's daughter, Thelma. 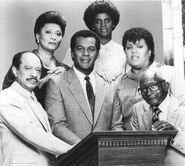 The cast of "Amen"
Add a photo to this gallery

Retrieved from "https://nbc.fandom.com/wiki/Amen?oldid=7096"
Community content is available under CC-BY-SA unless otherwise noted.