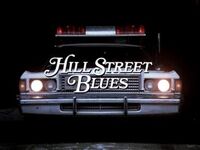 Hill Street Blues was a police drama series created by Michael Kozoll & Steven Bochco on NBC which aired from January 15, 1981 to May 12, 1987.

The show's debut season was rewarded with eight Emmy Awards (which was a debut season record surpassed only by "The West Wing"). In total, the series received 98 Emmy nominations during its run.

Retrieved from "https://nbc.fandom.com/wiki/Hill_Street_Blues?oldid=7750"
Community content is available under CC-BY-SA unless otherwise noted.